What is Aspirin-Exacerbated Respiratory Disease (AERD)?

What is Aspirin-Exacerbated Respiratory Disease (AERD)?

Millions of people around the world take painkillers every day for relief from mild pain symptoms. If you’re experiencing a headache, fever or joint pain, you might feel it worthwhile to take a medication like aspirin, naproxen or ibuprofen to reduce symptoms. However, if you have a condition known as AERD (aspirin-exacerbated respiratory disease), you could end up feeling worse after taking one of these medicines. Thankfully, AERD can be treated.

AERD is caused by an extreme sensitivity to non-steroidal anti-inflammatory drugs, or NSAIDs for short. This condition can cause breathing problems or exacerbate existing respiratory conditions like asthma. It can also cause sinus problems associated with nasal polyps.In fact, it’s not uncommon for people with asthma to experience aspirin-exacerbated respiratory syndrome. Almost 10% of adults with asthma and approximately one-third of adults with both nasal polyps and asthma suffer from AERD, which is also known as Samter’s triad. 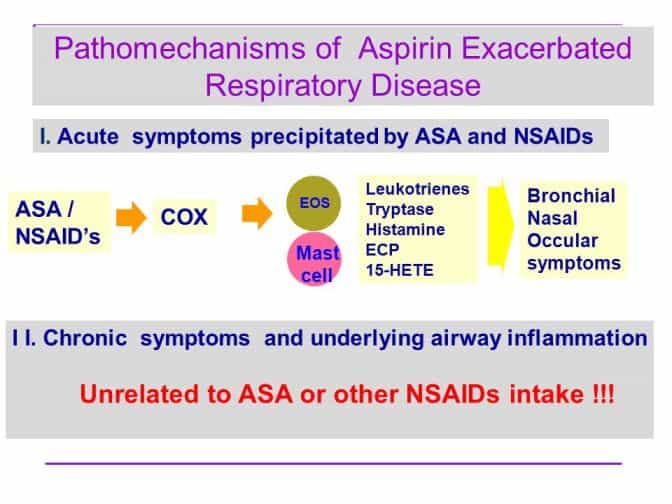 The onset of AERD is typically rapid. People are usually first affected by it between the ages of 20 and 50. Doctors aren’t always certain of the causes of AERD, or why some people get it while others don’t.

Non-steroidal anti-inflammatory drugs and aspirin work by blocking an enzyme known as COX1. This enzyme promotes inflammation and pain. Blocking this enzyme in patients with AERD can sometimes backfire, causing them to create too many leukotrienes. Leukotrienes cause tightening of the airways and other breathing problems, in a similar manner to an allergic reaction.

Researchers still don’t know why aspirin causes high levels of leukotrienes in some patients. However, if you’ve ever been a smoker, research suggests that you could be at a heightened risk of AERD. This is also true for patients who were exposed to second-hand smoke in the household as children.

It’s not uncommon for AERD sufferers to also develop symptoms of lower respiratory distress commonly associated with asthma. These symptoms can include:

• Coughing
• Tightness of the chest
• Wheezing

Some people with AERD might also experience dizziness, fatigue, nausea and cramps. In the most serious of cases, AERD patients might lose their sense of smell and experience frequent and recurrent sinus infections.

Drinking alcohol can cause complications among those with AERD. Approximately two-thirds of people with AERD develop mild or moderate respiratory issues after drinking alcohol. A single serving of an alcoholic drink is enough to elicit a reaction.

How is AERD diagnosed?

It’s not possible to take a blood test to confirm if you have AERD. Your doctor can instead check for Samter’s triad (asthma, nasal polyps and a reaction when you take NSAIDs). If you have each of these concurrently, your doctor might diagnose you as having AERD.

To confirm whether your reaction is caused by NSAIDs or aspirin, your doctor may arrange for you to take an “aspirin challenge”. This involves taking aspirin or an NSAID while under the supervision of your doctor.

If you have asthma which is difficult to control, or if you’ve had a recent respiratory infection (such as a cold or flu), you should avoid the aspirin challenge. Patients with liver, heart or kidney disease and pregnant women should also avoid taking this diagnostic.

There is no cure for aspirin-exacerbated respiratory syndrome, although there are things you can do to manage it. Your doctor might prescribe steroid sprays or sinus rinses to help with nasal symptoms. They may also inject steroids into nasal polyps to shrink or destroy them.

Some AERD patients can desensitise themselves to the side effects of NSAIDs. This process involves taking a small dose of aspirin under the supervision of your doctor. Each day, your doctor will provide you with a slightly larger aspirin dose until you experience AERD symptoms. You will then receive that dose daily until you no longer experience a reaction. When you can handle a dose without a reaction, the process starts again, until you are able to take full doses of aspirin and/or NSAIDs.

If you think you may have AERD or you would like to know more about managing the condition, please do not hesitate to make an appointment with our ENT team today.